Today, I have a guest interview with fellow Choc Lit author Angela Britnell. 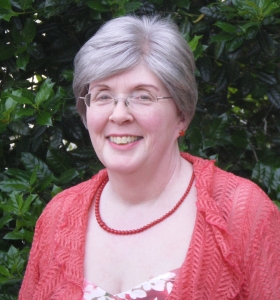 Angela grew up in Cornwall and returns frequently from her new home in Nashville, Tennessee to visit family and friends, drink tea and eat far too many Cornish pasties! A lifelong love of reading turned into a passion for writing contemporary romance and her novels are usually set in the many places she’s visited or lived on her extensive travels.

Thanks to over three decades of marriage to her wonderful American husband she’s a huge fan of transatlantic romance and always makes sure her characters get their own happy-ever-after. She is a member of the Romantic Novelists’ Association, the Romance Writers of America and the Music City Romance Writers.

I asked Angela some questions:-

When do you write?

I think we all discover the time/place that works best for us but I know for me it also depends on whether I have a deadline to meet – whether it’s from a publisher or life in general!

In a normal week (and those have been rare recently) I start the day with the business side of writing like emails, social media etc. After that I’m often out until lunchtime either at my water aerobics class, volunteering at the Franklin library, or maybe a little retail therapy! By one o’clock I hope to be settled in front of the computer and then the fun starts! If I’m writing as opposed to editing I first go through the previous day’s words and make minor changes before carrying on. My aim when I’m on my first draft is a daily minimum of 1,500 words but we all know it doesn’t always happen.

I sometimes write on evenings or weekends it just depends how the mood strikes me, what else we’ve got going on or if it’s American football season. Once that starts Richard wouldn’t know if I was in the same house let alone the same room and as long as food turns up occasionally I can write as long as I want!

Can you tell us more about the Nashville Connections Series?

For a long time after we moved to Nashville I resisted setting any of my stories here because I was too afraid of getting it wrong! Finally in 2013 I decided to give it a try and came up with the idea for ‘What Happens in Nashville’, a fun novella based around a British hen party coming to Nashville. I let my born and bred Southern friend, Janet, read it for any obvious errors so I didn’t completely put my foot in it and she loved it.

After that was published in 2014 I came up with the idea for another novella ‘The Wedding Reject Table’ based around the singles table at a wedding. My publisher, Choc Lit, suggested tying the two books together as they both had Nashville heroes and that’s when the Nashville Connections series was born. After that my full length novel ‘Love Me for a Reason’ came out as the third Nashville Connections book and another novella ‘You’re the One that I Want’ released on 13 September 2016, is the fourth. They’re completely stand alone stories but always have a tempting Southern man at their core and of course I’m a huge fan of them.

How did you come to move from Cornwall to Nashville?

It’s a long story but the Reader’s Digest Condensed version is that I joined what was then the WRNS at eighteen and was based in Portsmouth and Plymouth before being sent to Denmark.

I met my husband there, and yes he is my own Southern hero – born in Mississippi and raised in Tennessee. At the time Richard was a US Naval Flight Officer and we started dating almost immediately, marrying a year later in Cornwall. After Denmark we lived in Sicily, California and Maryland – having a son in each place – before moving to London for Richard’s last military assignment. He retired from the Navy and was offered a job near Nashville so we moved there in 1996 and are amazed sometimes to wonder where the last 20 years have gone!

What if you didn’t want to fake it any more? When Sarah, a teacher from Cornwall, and Matt, a businessman from Nashville, meet on a European coach tour, they soon find themselves in a relationship … Except it’s a fake relationship. Because Matt is too busy for romance, and Sarah is only trying to make her cheating ex-husband jealous … isn’t she? As Matt and Sarah complete their tour of Europe, they do all the things real couples are supposed to do – from visiting fairy-tale castles in Germany to recreating the scene from Romeo and Juliet in Verona. And, of course, for every picturesque destination there’s a loved-up selfie and Facebook post to match. But as their holiday comes to an end, Sarah and Matt realise that they’re not happy with their pretend relationship. Perhaps, they want the real thing.

If you’d like to find out more of what Angela gets up to (Advance warning: this may include references to wine, chocolate and the hunky Aidan Turner) check out www.angelabritnellromance.com or follow her on www.facebook.com/angelabritnell and www.twitter.com/angelabritnell

Thank you for appearing on my blog, Angela. If you have any questions for her, please submit them in the comments and I’m sure Angela will reply.