I’ve settled well in my new home. Mummy hasn’t a clue about doggie things, but she’s doing okay. Daddy and the boy seem to like me too.
They took me to the vet’s the day after I arrived and it was a very embarrassing experience. I was being so good and didn’t even flinch as I was examined and injected. The boy, on the other hand, fainted and was sick three times on the consulting room floor.
I’ve got a socialisation plan and seem to have visitors all the time. Mummy has ticked off elderly people and men with beards. Who’s idea was the puppy party? Nightmare! What was the vet thinking? Why would I want to meet dogs four times bigger than me? There was a Staffie and a Springer – they just went for each other’s throats. The Labrador, Major was nice, but not interested in a little thing like me. I shook and hid my head in mummy’s arms. I was proud to be chosen as the demonstration puppy for the veterinary nurse to show owners how to health check their pups and stood very still, mainly in case the bigger dogs thought I was dinner! I had my teeth cleaned with poultry flavoured toothpaste – yum. We even got a party bag, but the frisbee they gave me was so big, I’m using it as a seat.
Whoo hoo, my owners gave up on puppy pads and take me outside on an annoying lead. I can wander around, wee where I like and try to eat weeds, sticks and moss if the owners aren’t watching. I love the wind in my long hair and run as fast as a whippet.
Life is good. I’m fed, watered and played with. I’ve got loads of toys. I’ve even worked out how to get treats by sitting on command, touching my nose to a hand and sometimes fetching a ball. Ten weeks old already and I think I’m going to like it here. 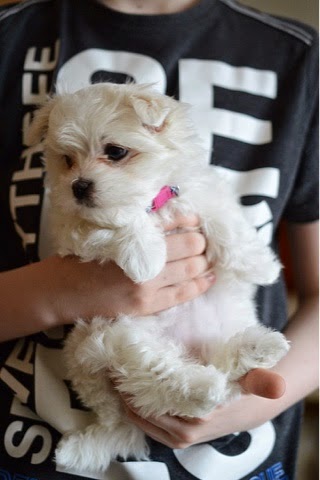