My guest this week is Henriette Gyland who writes for Choc Lit. 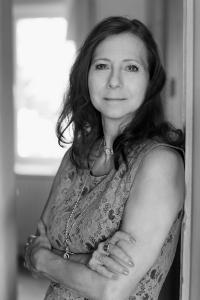 Henriette grew up in Northern Denmark but moved to England after graduating from University of Copenhagen. She wrote her first book aged ten, a tale of two orphan sisters running away to Egypt fortunately to be adopted by a perfect family they meet on the Orient Express.

Between that first literary exploit and now, she’s worked in the Danish civil service, for a travel agent, a consultancy company, in banking, hospital administration, and for a county court before setting herself up as a freelance translator and linguist.

She has won two prizes, the RNA’s Katie Fforde Bursary in 2008 and the 2011 Festival of Romance New Talent Award, which led to a publishing contract with the independent publisher Choc Lit. She writes very dark, romantic suspense novels, and loves giving her characters that happy ending which troubled individuals are so often denied in real life.

Henriette is a member of the Romantic Novelists’ Association, the Crime Writers’ Association and the Historical Novel Society.

I asked Henritte some questions:-

Where do you write?

It varies depending on my mood. When I’m stuck on a plot point or a character has something difficult to work through emotionally, I prefer to write long-hand, will sit anywhere else rather than my office, be it the garden, my sofa, the local library or a café. Other times, particularly when writing action scenes, I’ll just bash it out on the computer without stopping to think. A clever friend once told me this has something to do with which part of our brains we’re using for various tasks – sounds very plausible to me.

What inspires your writing?

Anything. Conversations overheard on the bus, a human interest article in the paper, real life crime, cop shows, and much more. I jot things down or cut out articles, then put it all in my “Ideas Box”, which is basically an old chocolate box, for re-visiting later.

In Up Close, how is the heroine like you?

Up to a point, I think our main characters are essentially ourselves, thrown into circumstances and situations very different to our own, and then we theorise how WE might act and react in those circumstances. But characters can often take over and even surprise us. Lia in Up Close is very like me in terms of her no-nonsense efficiency, although her damaged side is purely fictitious.

If Up Close was filmed, who would portray your characters?

Oh man, I’d be like a kid in a sweetshop if that was my decision! Seriously, I’d love for Rachel Weisz to play Lia because she has that doe-eyed vulnerability to her and a toughness at the same time. Aidan could be portrayed by Jake Gyllenhaal as he’s so good at the brooding look.

You’ve published 4 titles now – which is your own favourite?

I’m often asked this, and it’s a difficult question to answer, but on reflection I think it’s Up Close (so far). You have a very special relationship with that first book because it’s such a learning curve, and because the path to publication is rarely an easy one. You never forget your first, as they say 😉

Thank you, Henriette, it is always interesting to get an insight into the writing world of another author. 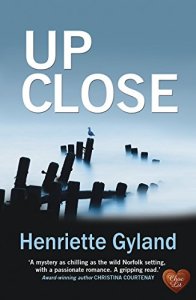 Too close for comfort…

When Dr Lia Thompson’s grandmother dies unexpectedly, Lia is horrified to have to leave her life in America and return to a cold and creaky house in Norfolk. But as events unfold, she can’t help feeling that there is more to her grandmother’s death than meets the eye.

Aidan Morrell is surprised to see Lia, his teenage crush, back in town. But Aidan’s accident when serving in the navy has scarred him in more ways than one, and he has other secrets which must stay hidden at all costs, even from Lia.

As Lia comes closer to uncovering the truth, she is forced to question everything she thought she knew. In a world of increasing danger, is Aidan someone she can trust?

Buying Links for Up Close