Kirsty Ferry is becoming a regular blog visitor. She returns today to answer some questions about the next book in her Hartsford Mystery series for Choc Lit, which is out now – Watch for me by Candlelight. 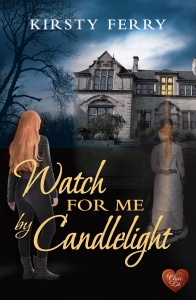 “The stars are aligning and it’s time again …”

Working at the Folk Museum in Hartsford village means that Kate Howard is surrounded by all sorts of unusual vintage items. Of course she has her favourites; particularly the Victorian ice skates with a name – ‘CAT’ – mysteriously painted on the sides.

But what Kate doesn’t realise is how much she has in common with Catriona Aphrodite Tredegar, the original owner of the skates, or how their lives will become strangely entwined. All Kate knows is that as soon as she bumps into farrier Theo Kent, things start getting weird: there’s the vivid, disconcerting visions and then of course the overwhelming sense that she’s met Theo before …

I asked Kirsty some questions:-

Where did the inspiration for the Folk Museum at Hartsford village come from?

It’s based on the Angus Folk Museum near Glamis, in Scotland. The museum was in a terraced row of six cottages built in 1793, and also included a farm steading. It was run by the National Trust for Scotland, but unfortunately it closed in 2017, due to structural problems. I think it had problems with the roof, and as my heroine Kate lives in the attics of her museum, I hope Hartsford museum doesn’t suffer the same fate. Like the Hartsford Folk Museum, you could walk through the terrace and come across different collections and cottage interiors as you went. There was also a rather impressive horse-drawn hearse in one of the farm buildings, which was very spooky indeed, but that didn’t find its way into my book – it was maybe a little bit too dark and Gothic for this story!

Hartsford Folk Museum has also got a little bit of the Bellingham Heritage Centre in it, which is a gem of a place, a few miles away from Hexham in Northumberland. That’s where the inspiration for Will’s blacksmith’s forge came from as they have one set up in the museum. There’s also a copy of a very wonderful painting there that an artist created from a group of his friends, family and staff, and it’s fascinating to read their stories.

If you were going to start a collection of vintage things, what would be in it?

Costumes! Loads and loads of costumes. I have a desire to get into the V&A museum and run amok amongst those clothes, trying on whichever ones will fit– which probably wouldn’t be any of them without a sturdy corset. I just love vintage clothing. I can remember drawing a map at school for a village we had to create for an English project, and I included a costume museum in it.

I also loved visiting the Bath Costume Museum years ago, and saw a fantastic Yves Sant Laurent exhibition at Bowes Museum recently about fashion, where they juxtaposed the old and new together, and an exhibition at the Pannett Gallery in Whitby about wedding dresses. There is a very small collection at the Discovery Museum in Newcastle as well. If I can get to an exhibition to see costumes, I will. Being the only female in the house can often pose a challenge in that respect though!

You seem to have a fascination for stories about the past and present colliding. Have you ever had a strange occurrence of your own?

Interesting question. I’m going to say yes – nothing as exciting as the experiences my characters have, but the building I work in is haunted. It’s a bit like the Folk Museum, in that it’s an old terrace knocked together; but it’s a row of five huge Georgian townhouses with a lot of history. Many of the cleaning and estates staff can tell tales about men disappearing into rooms or drifting up the stairs then vanishing, and I can tell you about the argument that was going on early one morning when I got into work. I walked into the office, embarrassed that I would be intruding on something, and the voices just stopped and the room was empty.

On other occasions, I lost a pen, and it turned up in a place I had just looked; a wooden pole we used to open the windows just laid itself gently on the ground one morning; and many a time, I’ve turned around to speak to a colleague next to me or turned to follow them into a room and found I’ve been alone. I also used to live in a haunted house and someone walked up the stairs one night. It was a lady and all she’d ever done was stand by my bed in the wake of a cold draft, but the day she got noisy I asked her to stop. It never happened again and curiously I was never scared. I also never saw her; I just used to burrow under the blankets but weirdly I just knew what she looked like.

I have to ask if you had an image in mind when describing Theo Kent, who sounds sexy even from his name?

No, not really. But yes, he’s very nice! All outdoorsy and fit! If you look at my book trailer on YouTube, I found a picture of a chap who could very much have been him though, and put the photo in. It was uncanny – exactly as I imagined him to be.

Will there be more stories from Hartsford Village?

Yes. The next one is called Watch for me at Twilight, and it’s all good to go. That one is Cassie’s story, and runs concurrently with Candlelight,which was interesting to write as I had to keep cross-referencing the stories to see where they matched to make sure there were no discrepancies for eagle-eyed readers to spot. I’ve also submitted a Christmas novella, which is the fourth in the series, and is my heroine’s brother, Tom’s, story. I’m awaiting a decision on that one, so fingers crossed Watch for me at Christmastime will make an appearance this year. That’s the working title, at least!

To buy Watch for me by Candlelight you can use the following link:- http://www.choc-lit.com/productcat/kirsty-ferry/

Kirsty is from the North East of England and won the English Heritage/Belsay Hall National Creative Writing competition in 2009 with the ghostly tale ‘Enchantment‘.

Her timeslip novel, ‘Some Veil Did Fall‘, a paranormal romance set in Whitby, was published by Choc Lit in Autumn 2014. This was followed by another Choc Lit timeslip, ‘The Girl in the Painting‘ in February 2016 and ‘The Girl in the Photograph’ in March 2017. October 2017 saw the release of ‘Watch for me by Moonlight’,  ‘A Little Bit of Christmas Magic’ and ‘Every Witch Way’, again, all published by Choc Lit. Her latest release Watch for me by Candlelight is out on 3 April 2018.

The experience of signing ‘Some Veil Did Fall‘ in a quirky bookshop in the midst of Goth Weekend in Whitby, dressed as a recently undead person was one of the highlights of her writing career so far!

Kirsty’s day-job involves sharing a Georgian building with an eclectic collection of ghosts – which can sometimes prove rather interesting.

Thank you for answering my questions, Kirsty and good luck with the book.

*** On a personal note, I’m getting both nervous and excited as the ebook of my second novel in the Borteen Secrets Series for Choc Lit is out on 1 May. Pre-order The Truth Lies Buried here now!!!***

Thank you for visiting my blog – Morton S. Gray – Author. I hope you enjoyed this post. You can also find me on Facebook, Twitter and Instagram. My novel The Girl on the Beach published by Choc Lit is available from all eBook platforms – Amazon, Apple iBooks, Kobo, Barnes and Noble and Google Play. The Girl on the Beach will be available as a paperback from 10 April 2018 – to order click Amazon. My new novel The Truth Lies Buried is published as an eBook on 1 May 2018 and can be pre-ordered here. 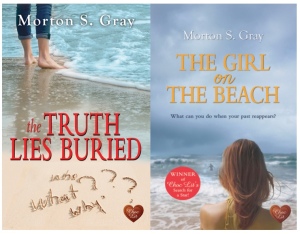