This week I’m joined by Ruby Fiction author, Angela Barton. Her novel Arlette’s Story was published on 26 June 2018. I asked her some questions:-

Hello Morton and thank you very much for inviting me to be a guest on your blog.

What lead to you writing this novel?

Prior to writing Arlette’s Story, I had completed two contemporary women’s fiction novels but before starting a third, my husband and I went on holiday to France. While there we visited the museum and martyred village of Oradour-sur-Glane, seven decades after two hundred Nazis drove into the square on 10thJune 1944 and destroyed everything. Charles de Gaulle had declared that the ruins must stay as a permanent national monument to the townspeople’s suffering, so I found Oradour just as it had been left on the day of the genocide; frozen in time. I was shocked by the village’s unembellished rawness. It was as if I was entering a sacred place where everyone spoke in hushed whispers.

In my own very small way, I felt compelled to help keep the memory of that day alive. I was desperate to tell the story from a survivor’s viewpoint. I had to create a protagonist and lead her through her family’s war years, so I chose a twenty-year-old farm girl named Arlette. I placed her in a farm setting because I wanted her to be just an ordinary person who faces extraordinary circumstances. Arlette’s Story isn’t solely a story about war. For four years Arlette feels the reverberations of war but she also builds friendships, laughs, falls in love, enjoys family life, experiences adventures and lives her life positively despite challenges being placed in her way.

How easy was it to change genres?

In my mind I thought it would be easy, but in practice it was more challenging. Firstly, my literary agent in London wasn’t keen on the idea. I had imagined she would have been supportive, but she was less than enthused. She said I had a talent for contemporary fiction and although she hadn’t found a publisher for my earlier novel yet, she was hopeful that she would. I now faced a dilemma. Either end my hard fought contract with an agent and the possibility of becoming published, or write what I felt passionate about. I decided to end my relationship with my agent but instead of feeling lost, I felt free. Free to write Arlette’s Story.

How much research did you have to do for this book?

I did mountains of research for Arlette’s Story. I visited the National War Museum in London because I wanted to see German uniforms, insignias, weapons and vehicles for myself. It was important to me to describe them accurately. I read endless factual books about WW2 in France, visited Oradour’s martyred village three more times, spoke to museum staff there, trawled the internet, read too many war novels to count, listened to talks by ex-servicemen, scoured newspaper articles, contacted historians on Twitter and watched war films.

As you can imagine, I felt a weight of responsibility in writing about a fictional character living through a real atrocity, and rightly so. I wanted to honour the villagers’ last hours with respect and honesty and it was essential that I chose the right words and didn’t glamourize this horrendous crime. It made for tough and emotional research sometimes, but the thought of what those brave villagers faced seventy-four years earlier, kept me determined to write a book and dedicate it to them.

You have just begun a new adventure of your own – would you share a little about it?

Earlier this year, my husband and I moved to France to live. For the past ten years our dream has been to live a simpler, quieter, stress-free life in the French countryside, doing what we love doing and not what needs doing in order to pay the bills. Paul had been ill some years earlier and was diagnosed with a brain tumour. It was successfully operated on but a life-threatening illness makes people reassess what they’re doing with their lives. We decided that as life is short – why not follow our dream? So when the children left home and were all in secure jobs and relationships, we decided that the time was right. We moved to France earlier this year where we’ve found a slower and less stressful way of life.

In 2016 we bought a field with a barn attached and in 2017 we cultivated our field and planted over 3,000 lavender plants in long rows. This year we sold our house in England and moved to Charente in the southwest of the country.

The lavender field is a purple haze of loveliness as I type this, but we’re in the process of harvesting it to make soap, candles and bundles of bouquets to sell. I also enjoy making jewellery by sinking dried lavender into resin and creating tiny, half-inch books (with pages and book covers) into earrings. One day I will get round to creating an Etsy page on which to sell them. (Yes please – let me have the link. Mx)

What can we look forward to from you next?

I’m very lucky because Choc Lit’s new imprint, Ruby Fiction, offered me contracts for my first two contemporary novels in addition to my historical debut. I was delighted to sign with them last October so the future holds two more book publications.

My WIP is another historical novel with a working title of Tomorrow’s Not Promised. It’s also set during WW2 but this time in German occupied Paris. (I think I may need several research trips to the City of Love!) It involves my heroine and her surprising love interest, hiding something in the catacombs beneath Paris’s bustling streets. I’ve already researched a lot about the catacombs and I’m very excited about climbing beneath the city and exploring the dark, skeleton-packed, hidden tunnels! 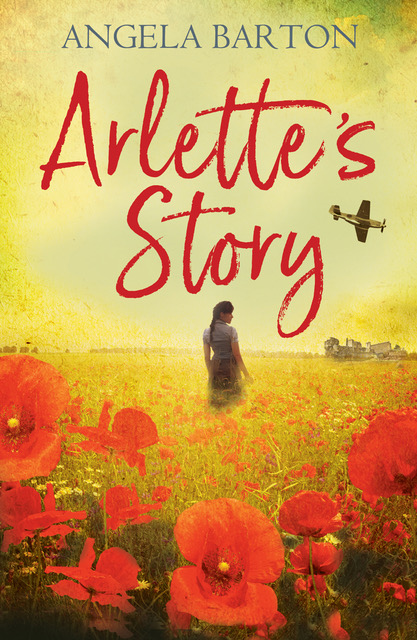 One woman’s struggle to fight back against the enemy in order to protect the ones she loves.

When Arlette Blaise sees a German plane fly over the family farm in 1940, she’s comforted by the fact that the occupying forces are far away in the north of the country. Surely the war will not reach her family in the idyllic French countryside near to the small town of Oradour-sur-Glane?

But then Saul Epstein, a young Jewish man driven from his home by the Nazis, arrives at the farm and Arlette begins to realise that her peaceful existence might be gone for good …

Angela Barton was born in London and grew up in Nottingham. She is married with three grown up children. Angela is passionate about writing both contemporary and historical fiction and loves time spent researching facts for her storylines. Having signed publishing contracts for three of her completed novels with Choc Lit’s new imprint, Ruby Fiction, Angela is excited to be working alongside such a lovely and supportive team. She and her husband are now lavender farmers living in south-west France. As well as writing, Angela’s second passion is making dried flower and book-related jewellery. She’s looking forward to completing her fourth novel in the beautiful countryside of Charente. Angela is a member of the Romantic Novelists’ Association and Nottingham Writers’ Studio.

Thank you for such an interesting post, Angela. I think readers will join me in being fascinated by your book, the story behind it and your own personal journey. May I wish you well in your new venture. Mx

The Girl on the Beach published by Choc Lit is available as a paperback and from all eBook platforms – Amazon, Apple iBooks, Kobo, Barnes and Noble and Google Play.