I am particularly pleased to welcome my blog guest this week – Lisa Hill has joined Choc Lit to publish her debut novel Meet Me at Number Five after winning their Search for a Star competition 2016 (the one following my own win in the same competition). 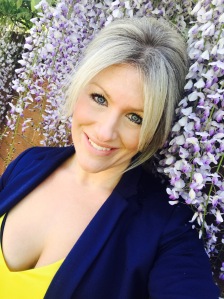 Lisa grew up in the village of Bussage, near Stroud, in the Cotswolds until she returned to Cheltenham as a teenager.  She is married to her very own hero, Matt, and has three sons, Hamish, Archie and Laurence.

Her first encounter of a romance author was chats over the garden wall between her father, Godfrey, and Mrs Cooper from the neighbouring village of Bisley.  It came as quite a surprise in later life to find that Mrs Cooper was in fact Jilly Cooper!  Lisa’s writing inspiration now comes from other Cotswolds authors including Jill Mansell and Katie Fforde.

Lisa writes contemporary romance with a light-hearted tone.  What interests her most is people, their interactions, emotions and relationships.  It’s probably why her career to date has been based in property; she confesses herself that she is ‘naturally curious’.

When she’s not busy writing, helping Matt run his electrical empire, or being her sons’ taxi service Lisa enjoys running with her gun dog, Sparky. They are both currently training for the Stroud half-marathon although Sparky’s motivation lies much more in chasing bunny rabbits.

Lisa is a graduate of the Romantic Novelists’ Association New Writers’ Scheme and attributes this supportive and informative scheme to her winning the Choc Lit Search for a Star competition 2016 with her debut novel, Meet Me at Number Five.

I asked Lisa some questions:-

How is your Heroine in Meet Me at Number Five like you?

There are two heroines in Meet Me at Number Five, Grace who is a blonde and a bit ditsy at times and Hennie who looks a bit like Liz Hurley and has her guard up at all times. Neither are like me but for good reason. Before writing Meet Me at Number Five I wrote two books both set in Yorkshire (I am a self-confessed Sean Bean addict). I received good feedback from people who critiqued them but I just couldn’t quite get anyone to take them on. Two excellent pieces of advice I was given were a) to take myself out of the novel and b) to set a novel where I come from, which in my case is the Cotswolds. So, Grace and Hennie were both crafted not to be like me, however, Clara, Grace and Hennie’s Nana was based on my own Nana, Winifred, who passed away when I was 15. Clara is very like Win, especially her feistiness and her propensity to meddle in situations!

Sadly, not anymore (although I am seriously considering getting back in the saddle!). I did ride regularly as a child and teen though; my father always said he rued the day he let my mother sit me on a horse on my third birthday as I was hooked from that first ride. My aunt had a rocking horse made for me called Tom, the first horse I ever rode. I was absolutely horse mad, if I wasn’t riding one, I was playing with my Sindy horses but alas the time came when I needed a horse of my own and my parents weren’t in that league so I sadly drifted away from riding.

My passion for horse racing and knowledge came from a man called Alan Wright. He was a HR Director and a friend of my Dad’s and took me on as a Personnel Assistant when I was 20, ensuring the publishing company I worked for paid for me to be put through my HR qualifications at the local university. However, Alan’s real passion was horse racing and he even part-owned a racing horse. So, my daily routine at work focused more around horse racing than personnel as I would sit every morning with Alan while he went through the racing post and then I would be dispensed to the local bookies to place the bets for the day and collect yesterday’s winnings. It was less an education in human resources and more an education in life!

Tell us about your links to Jilly Cooper. (I never tire of hearing this story)

So, I grew up in a village called Bussage, in the Cotwolds, on the edge of the Stroud Valleys, during the 1980s. Our neighbouring village was Bisley, where Jilly Cooper lived and was at the height of her writing career (Riders was released in 1985). My mother didn’t like dogs but my dad loved them so we would borrow our neighbour’s dog and take her for summer walks along the shady valley between Bussage and Bisley. Jilly’s house borders this valley and it was my father’s greatest pleasure to stop and chat with her if she was out gardening. Only, I only ever knew her as Mrs Cooper and it wasn’t until my teens when I started her reading her novels that I made the connection!

Equally, my mother used to meet up for coffee mornings and chats with her friends in the village and during the holidays I would tag along. They frequently discussed this lothario, Rupert Campbell-Black, from the other neighbouring village of Chalford and I used to think what a horrible man he sounded. Again, it wasn’t until I started reading Jilly’s novels that I realised he was fictitious!

How on earth do you fit writing into your busy life?

I won’t lie, it is quite tough! Not only do I have three boys of 14, 11 and 8, we have a dog and we run our own electrical business so I wear three hats mummy, office manager and writer/author. I find the best way is to be organised and disciplined. I am lucky enough to work from home full time so I try and split my day into three; school hours for writing, after school for homework and clubs and evenings for the office admin (it gets quite tiring sometimes!). Then I dip into the office admin and housework during the day when I’m writing. When I don’t have time for writing, I tend to be quite grumpy so I’ve learnt to donate more of my time to it!

Thank you, Lisa. May I wish you every success with this and your future novels. 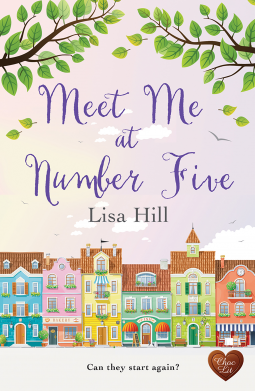 About Meet me at Number Five

What if finding happiness was a race against time?

Grace Cavendish knows a thing or two about horses – but what she doesn’t know is that her husband, top horse racing trainer Charlie Carrisbrook, is having a literal ‘roll in the hay’ right under her nose.

When the painful truth is revealed Grace has no choice but to move in with her highly-strung grandmother Clara and cousin Hennie; a single mum who has renounced men (at least that’s what she says!)

Determined to start again, Grace takes a job at the local restaurant, Number Five. And whilst serving up coffee and cake is a far cry from the stables, she enjoys it – especially as she gets to work alongside the rather scrumptious Sam Whittaker.

But the past is racing to catch up with Grace. Can her life still be a romp to victory or will a devastating secret stop her dead in her tracks?

Buying Links for Meet Me at Number Five

Lisa has produced a series of interesting blog posts about the subjects covered in her book. They are well worth a read. The links to these are below:-

Horses and Fine Dining – to be posted soon